Google Chrome will add an interstitial warning notifying users of HTTPS interception starting in Chrome 63. The warning can currently be viewed in Chrome’s dev browser, Canary, with a quick tweak. The stable version of Chrome 63 is set to go live December 5, 2017.

Now let’s hash out what this means, and why it’s relevant.

As you’re aware, the internet is moving rapidly towards universal encryption. The “http” protocol you see at the front of URLs is being replaced by “https,” which allows all data being transmitted to be secured with encryption. To aid in the proliferation of HTTPS, Google and the other browsers have incentivized it. Websites that add SSL and migrate to HTTPS have been given perks like small SEO boosts, access to advanced browser features and the promise of HTTP/2.

Google’s decision to add this warning is a different approach that aims to accomplish the same thing: complete encryption. 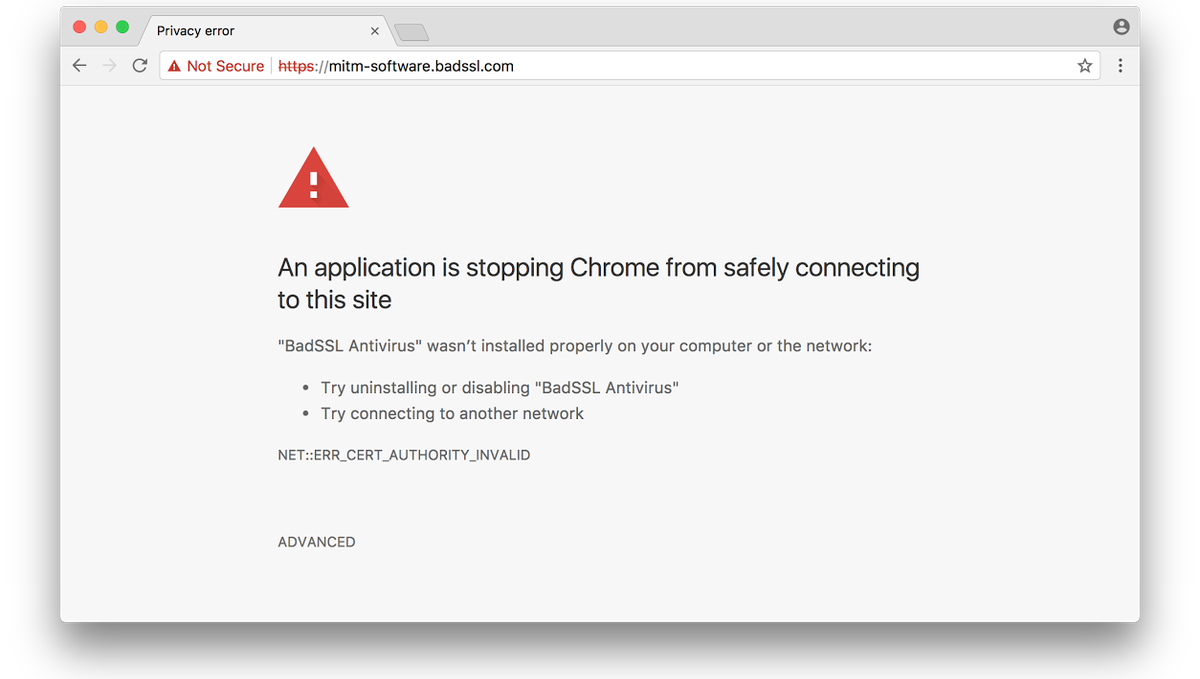 For the sake of this discussion, we’re going to divide TLS Interception into two main categories: Man-in-the-Middle attacks, which this alert will actively warn users about, and HTTPS Interception.

A Man-in-the-Middle attack is where an attacker is able to position him or herself between a user and the server that user is communicating with. As the name suggests, the man-in-the-middle can intercept and inspect all data transmitted between the two parties it’s spying on. It can even manipulate that information if it wants to.

SSL prevents a great number of MITM attacks just by virtue of adding encryption in the first place. But it is possible for an attacker to intercept the encryption and perform a MITM attack even when SSL is in place. Often times this sort of vulnerability occurs because of misconfiguration on the part of the site administrator, but it’s a threat nonetheless. In many cases, an affected user may not even know that an attack has taken place beyond getting a few TLS errors during their browsing experience.

Google’s decision to add a TLS interception warning will help alleviate that by presenting users with an unpassable interstitial warning anytime interception is detected. It will flag whenever it notices an AV CA that is not in its trust store (h/t to Patrick Figel for this correction).

The Other Kind of HTTPS Interception

Now let’s talk about the other reason to intercept HTTPS traffic. Technically, this category still constitutes MITM, but its aim is a little different. In this instance, you’re intercepting HTTPS traffic to inspect it for security purposes.

Now, this type of HTTPS interception is controversial. While many of the security companies that sell it claim that it is harmless, there have been studies that show HTTPS Interception weakens the overall security of users’ data.

Frankly, the topic of HTTPS Interception as a security practice is a completely different debate for another time. There are valid points on both sides, but the evidence tends to point towards the practice being harmful. I’m just mentioning it to help complete this discussion.

Either way, this type of HTTPS interception is unlikely to trigger Google’s new TLS Interception warning.

How to Enable TLS Interception Warnings on Canary

While you’ll have to wait for Chrome 63 in December for these changes to show up on their own, you can enable Google’s TLS Interception warning on Chrome’s dev browser, Canary. Here’s how to do it:

What We Hashed Out (For Skimmers)

Here are the key points we covered in today’s discussion: