Sectigo to start issuing from new Roots on January 14th

The Comodo CA roots are out, USERTrust roots will replace them

Last month we were excited to share news that one of our biggest partners, Sectigo, was changing its name from Comodo CA. It was a much-needed move as Comodo Group, the company Sectigo split from, operates in the same space and had, more or less the same colors and logo.

Now, in an announcement made today, Sectigo is entering the next phase of its transition: it’s swapping out the old Comodo CA roots come January 14, 2019.

So, today we’ll keep it short and we’ll discuss what Sectigo is doing and what it will mean to Sectigo customers moving forward.

While we’re not going to go in-depth about Root CAs and Intermediates, it is worth just glossing over really quickly so the rest of this information will make a little more sense.

Every operating system maintains a Root store (sometimes called a trust store) that contains a set of root certificates that literally live on your system. These roots are incredibly valuable, because they can be used to issue trusted digital certificates like SSL/TLS certificates and signing certificates.

Now, once again, here’s the thing about Roots: they’re powerful, and valuable to the point of being dangerous. The various root programs (Mozilla’s, Apple’s, Microsoft’s, Google’s) are exceedingly stringent in their requirements before adding new roots. CAs must undergo audits, there are review processes and some of the folks running them are a bit… difficult.

But that’s for good reason, a Root CA can issue trusted certificates, so if it’s ever compromised it’s going to be a full-fledged disaster. This is an eventuality that everyone wants to guard against. It’s why CAs issue intermediate roots and sign certificates with those – adding an additional layer of protection – that way should it ever be necessary to revoke one you’re not losing the actual Root. It’s much easier to spin up an intermediate than a Root, as you’ll see in a moment.

Sectigo is changing its Root CAs and its Intermediates

Ok, now let’s talk about what’s going on with Sectigo and its decision to change roots on January 14th. As we just discussed, CAs typically don’t issue certificates directly off their roots. Instead they spin up intermediate roots and use those to sign.

Currently, this is what the certificate chain for Sectigo’s SSL/TLS certificate looks like: 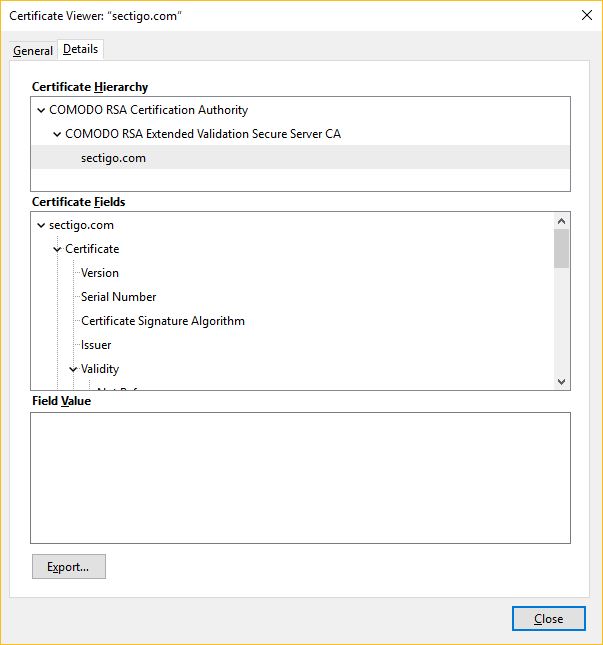 Up top you have the Comodo Root CA. Sectigo.com uses an Extended Validation certificate, so you can also see that the EV intermediate was used to sign the Sectigo leaf EV certificate.

Obviously, Sectigo is trying to get away from the Comodo branding, so having Roots and Intermediates that say “Comodo” is not desirable.

Personally, I had wondered how Sectigo was going to handle this transition from a PKI standpoint given the time it takes (and the rigor involved with) getting a root accepted into the various root programs. Not to mention the fact I keep pretty close tabs on what’s happening with the Mozilla root program and hadn’t seen anything to indicate an attempt had even been made.

Well, now we know. And the answer involves going back to the past to help sort out the future. Sectigo will begin using its USERTrust Root CAs as opposed to the Comodo Root CAs it had previously been chaining from. The USERTrust root is not new, the first of its ilk was actually created back in 2000 and expires on May 30, 2020. Newer versions have been generated since 2010 with lifespans pushed out as far as 2038. So the USERTrust Root CAs aren’t new, it’s just they don’t have “Comodo” in their name.

Using the USERTrust Root CAs, Sectigo will spin up its own branded intermediates so that its certificate chain will reflect its new branding, instead of being a holdover from a previous iteration of the company.

This move will prove doubly useful for Sectigo, too. Not only will it be able to apply its new branding to its intermediates and remove all semblance of Comodo from its certificate chains, but this also gives Sectigo more time to get its dedicated roots into the various root programs. I would imagine eventually the end goal is to have actual Sectigo Root CA certificates, but that obviously doesn’t happen overnight. So, swap roots, spin up new intermediates and take your time on getting the Root CAs accepted.

What does this mean for existing Sectigo customers?

As Sectigo said in its statement:

We want to assure all customers and partners that this change will happen seamlessly with no action needed.  Your existing certificates, issuing CAs, and roots will remain active and trusted.  The new Sectigo intermediates will be used to fulfill new requests, renewal requests, and requests that are pending at the time of this transition.  Reissuance requests that are handled directly by Sectigo will be fulfilled using the same issuing CA that issued your original certificate.

Ok, so let’s just run through a few things specifically:

These changes are set to take effect on January 14, 2019. We will let you know if anything changes between now and then…

As always, leave any comments or questions